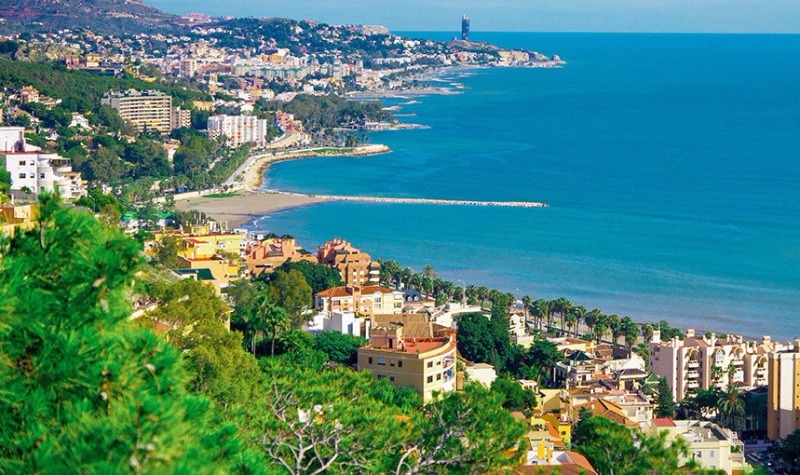 August of 2017 will take the pulse to a record year. Another one. With an airport at full capacity, a ready hotel offer and very high levels of occupancy, with a forecast of growth of 2.6% in overnight stays, according to the figures that the Junta of Andalusia managed last June. More than 400,000 passengers of 2,342 aircraft will use the Malaga-Costa del Sol airport facilities this weekend, according to the movements scheduled between last Friday and next Tuesday, August 1. Sources from the airport precinct reported that Sunday will be the day with the highest number of flights. Nothing more and nothing less than 492 devices will take off or land in Malaga, with an offer of 85,131 places. The mere contemplation of the figures show the strength of destiny and serve as a touchstone for optimism. Malaga is living this year the best tourist exercise since there are records. According to the tourism statistics report of the National Institute of Statistics, tourism has grown by 6% in the first half of the year in the capital and touches the 600,000 households, which have generated 1,144,459 overnight stays, 4.6% more than the same period Of 2016. In the absence of the final balance of July, the data handled by the Tourism area of â€‹â€‹the City of MÃ¡laga indicate that in July there has been a further increase of 6% in the number of travelers staying in hotels From the capital. Specifically, the establishments have given accommodation to about 110,000 tourists. These travelers have generated in the city some 245,000 overnight stays, 5% more. For August, the same trend is expected to continue, with increases of between 5 and 6%, both in the number of hotel stays and in the number of travelers staying. In this way, it will reach the approximately 222,000 tourists and more than 270,000 overnight stays. Thus, according to municipal forecasts, between June and September, it is expected that 475,000 tourists will be accommodated in the hotels of the city, which will generate almost one million overnight hotel stays. The average occupation in this period is expected to reach 85% and the average stay will exceed two days. The Councilor for Tourism, Julio Andrade recalls that this evolution has also reflected in the hiring. In fact, according to the Tourist Observatory of Malaga, between November and April, only in the hotel sector there has been an increase of 7.09% and already work in the hotels of the city a total of 1,390 people. These figures have been made possible by the good behavior of international markets. In fact, between January and June, a total of 356,434 foreign tourists stayed in hotels in Malaga, 14.15% more than in the same period of the previous year. These travelers generated 748,236 hotel stays, 11.68% more. And they compensate for the fall of the national market, which in the first half of the year has registered a decrease of 4%, reaching the figure of 241,862 tourists staying. These travelers generated 396,222 stays, 6.5% less than in 2016. Therefore, the Councilor for Tourism, Julio Andrade, has announced an increase in promotional actions in the domestic market. All these references make it clear that forecasts for Tourism and Planning Costa del Sol, announced at the beginning of the summer by the president of this public company (the old Board), ElÃ­as Bendodo, were right. According to these estimates, between June and September of this year will exceed seven million travelers. This figure represents an increase of 5.2% over the same period of 2016.